The Foxes go into the match after a dramatic final day at Blackfinch New Road as captain Colin Ackermann led from the front to earn victory over Lancashire CCC with eight balls to spare as Leicestershire chased down 150 runs in 17 overs.

Derbyshire head into the tie in a similar position after they came away from Trent Bridge with a last-over win following late heroics from Fynn Hudson-Prentice. 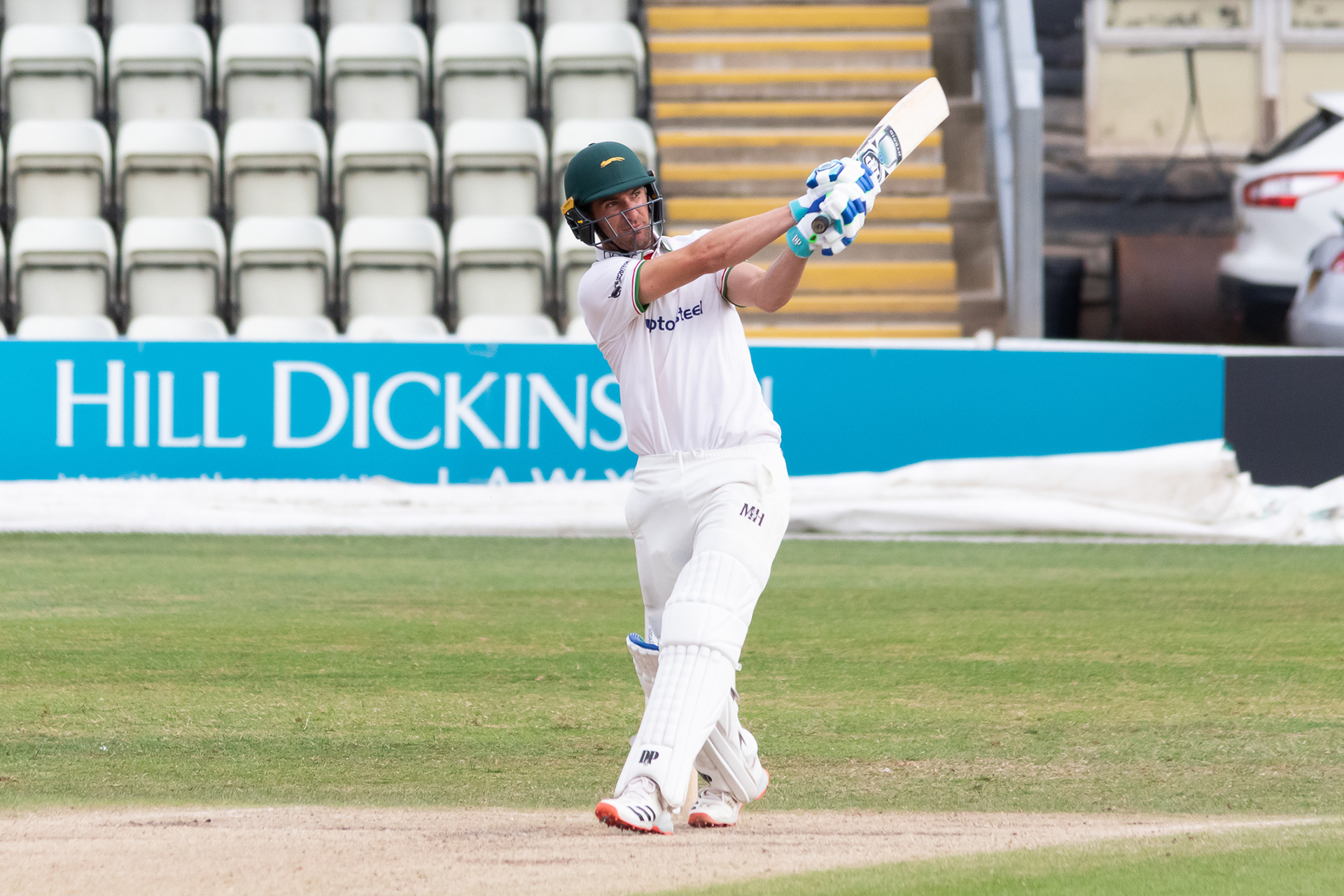 Watch the Foxes live through our online streaming service

As confirmed by Leicestershire County Cricket Club earlier in the week, the Bob Willis Trophy fixtures played at The Fischer County Ground will be available to watch via a live stream.

The matches to be streamed are this weekend's top-of-the-table clash v Derbyshire [August 8], Durham [August 15] and finishing with the local derby against Nottinghamshire [August 22].

The stream can be accessed via the Leicestershire CCC website and will be live each morning of the 4-day matches.

Derbyshire - ones to watch

Billy Godleman – The opening batsman found his form in the second innings against Nottinghamshire after being dismissed for just 18 in the first. The 31-year old’s last visit to the Fischer County Ground only saw him post a total of 30 runs over the two innings, and as he sits just 93 first-class runs shy of 9,000, he could prove a thorn in Leicestershire’s side.

Wayne Madsen – One of the securer top-order batsmen around, Madsen is integral to Derbyshire’s batting prowess having amassed over 12,000 first-class career runs. One of Manchester Original’s picks for the inaugural Hundred competition before it’s postponement, the right-hander could hold the key for the visitors.

Fynn Hudson-Prentice – Hudson-Prentice grabbed the game at Trent Bridge by the scruff of the neck three days ago and will in no doubt be high in confidence after helping his side to a famous win. The all-rounder can cause trouble with the ball as well as averaging 26 in his short career so far.

The last time that Leicestershire and Derbyshire met was in the 2019 Vitality Blast North Group crunch game at the Fischer County Ground.

The two teams had met 10 days prior at the Pattonair County Ground in which Leicestershire emerged victorious by 55 runs.

A defeat to Notts Outlaws in between set up a fixture in which the winner would be in pole position to clinch the fourth and final play-off spot.

Leicestershire won the toss and captain Colin Ackermann opted to bat first as the sun soaked the Fischer County Ground.

The decision looked to be a stroke of genius as Mark Cosgrove kicked things off in fantastic form, hitting seven fours and six during the powerplay.

Unfortunately, though, Cosgrove had already outlived two teammates during the powerplay as well.

Leicestershire’s hopes were really dented following the wicket of Cosgrove after being run out by Logan van Beek for 45.

He was one of just two Foxes to make it into double figures with Lewis Hill (16) being the other.

Leicestershire finished on 124 leaving Derbyshire a run-chase of 125.

The visitors won with nine wickets to spare as the 70-run partnership of Billy Godleman and Wayne Madsen followed up the wicket of Luis Reece to claim a comprehensive win the 19th over.

Derbyshire visited the Fischer County Ground as the break of County Championship cricket came to an end after the conclusion of the Royal London One-Day cup group stage fixtures.

Leicestershire had started off well in the County Championship, with a win, a draw and a defeat in their opening three fixtures, and we’re looking to build on the draw the week prior against Middlesex.

The game was a low scoring affair throughout, after Leicestershire had claimed all 10 Derbyshire first-innings wickets within just 50 overs with Mohammad Abbas and Chris Wright claiming three a piece, and Dieter Klein and Will Davis splitting the remaining four.

Derbyshire ended the first innings with 139 runs and Leicestershire had a golden opportunity to capitalise on their bowling unit’s success.

However, the batting line-up struggled to get going in conditions that clearly suited the bowlers with the Foxes managing to post 120 runs, 19 short of Derbyshire’s first innings total.

Image - Outside Off - Hassan Azad finished 46no against Derbyshire in 2019

Hassan Azad continued to impress at number three as he finished 46no from 107 balls – a performance that Leicestershire would soon come to expect from the batsman.

Tony Palladino really roused the Derbyshire troops posting figures of 18.3-7-29-5 in what was a superb innings for the Englishman.

Derbyshire then came back out for their second innings, and despite posting only 75 more runs than their first innings, were dominated by the Leicestershire bowlers once again.

Wayne Madsen earned the only half-century of the fixture as he top-scored for Derbyshire once again with 51.

Leicestershire’s second innings replicated their first with the bowler’s coming out on top with the Derbyshire attack this time sharing the wickets.

Derbyshire ran out eventual winners by 65 runs in a fixture that only saw 641 runs posted across four innings’.

Paul Nixon has named a 14-man squad for the Derbyshire match.

Gavin Griffiths and Sam Evans come into the squad with Arron Lilley rested.