REPORT | Leicestershire CCC faced Derbyshire CCC in the second round of the 2020 Bob Willis Trophy campaign as cricket returned to the Fischer County Ground.

Harry Dearden posted a stylish 70 but the Running Foxes were dismissed for 199 before Derbyshire CCC reduced the arrears to 98 by stumps for the loss of captain Billy Godleman.

While County made just one change from the team which beat Lancashire CCC in their opening fixture, Will Davis coming in for the rested Tom Taylor, injuries and rotation saw Derbyshire CCC make four from the side which recorded an excellent win against Nottinghamshire at Trent Bridge.

The scene was perfect for the first game of 2020 at the FCG with the sun beating down and barely a cloud in the sky.

The visitors bowled with excellent discipline early on and Slater (0) couldn’t repeat his tremendous debut performance as he edged and was caught by Matt Critchley off the lively Sam Conners.

Derbyshire CCC wicket-keeper Harvey Hossein had a major impact in two of the next three dismissals before lunch.

A strange wicket followed as Azad (6) left a Luis Reece delivery but Hosein showed speed of thought to throw down the stumps with the left-hander out of the batting crease, leaving Leicestershire at 15 for two.

Captain Colin Ackermann (12) came to the middle, however he became the third batsman to depart when nicking Dustin Melton low to Leus du Plooy at second slip.

The hosts needed a stand and it was provided by Dearden and George Rhodes. The left-hander played beautifully, finding the boundary with regularity, while Rhodes knuckled down.

Two excellent fours were struck in the 26th over as Dearden pulled high over mid-wicket before driving skilfully through extra.

Leicestershire CCC looked as though they were going into lunch three down but Hosein pulled off another dismissal, taking a sharp catch standing up off Alex Hughes as Rhodes departed for 5.

Although the batsman appeared to slip out of his crease, a thin edge meant the mode of dismissal was caught behind.

Dearden brought up his half-century off 89 balls shortly after lunch with two boundaries in the 30th over (8x4). He continued his strong knock, advancing to 70 before being trapped lbw by Connors (12x4). 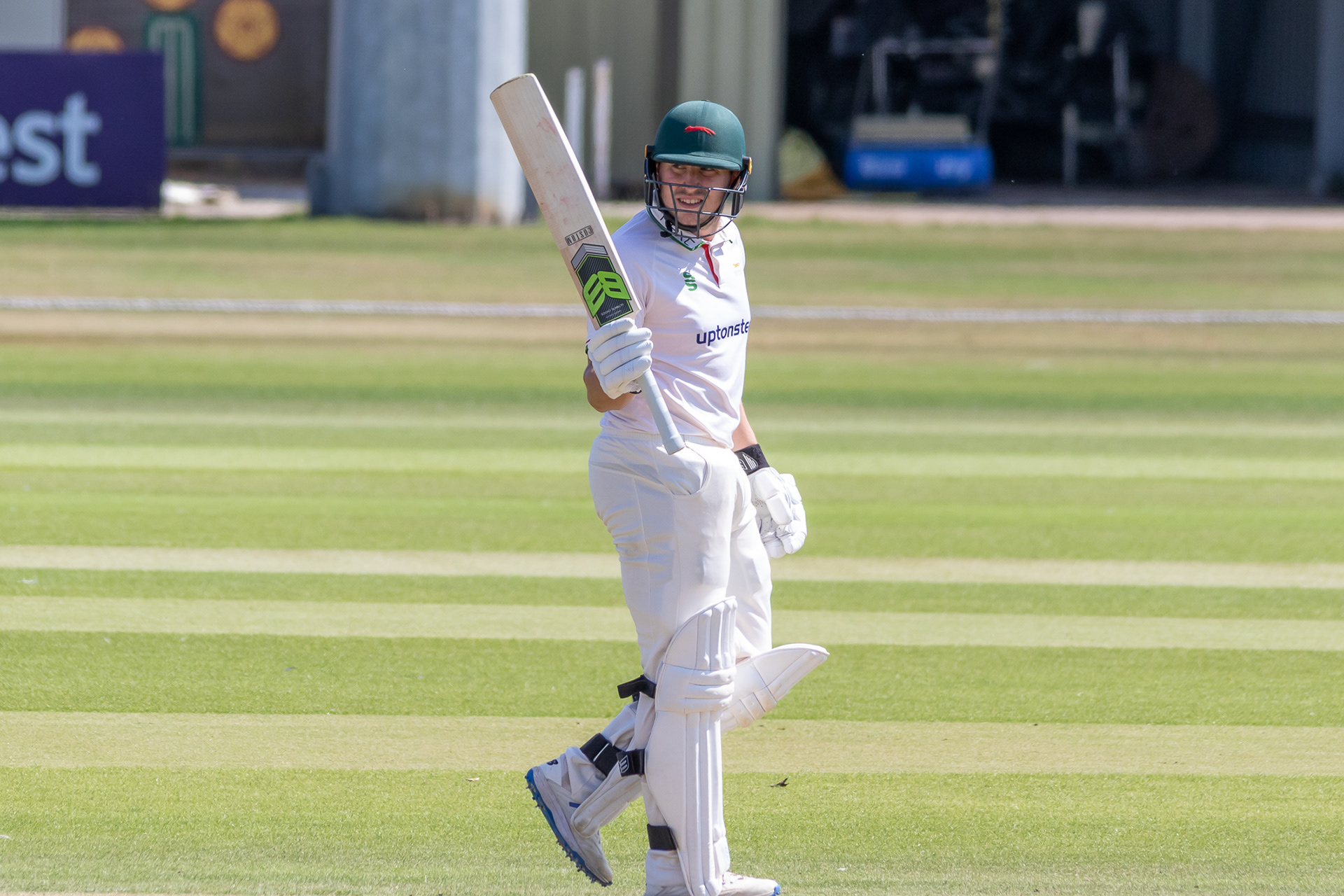 Image - Outside Off - Harry Dearden half-century

Ben Mike (14) was beginning to get into a rhythm by hitting a couple of fours, however he was bowled in the 40th over by Melton.

The seamer’s bowling was proving difficult for the Leicestershire CCC batsmen as Swindells played on for 21 (50b), followed by Klein (0) in the same manner.

That left the Foxes at 154 for eight but Davis played an important role in guiding the score towards 200.

Former Derbyshire CCC pair Davis and Parkinson recorded an important partnership of 34 before the latter nicked Reece through to Hosein for 21 (70b 1x4).

The Foxes were closing in on 200 with Wright and Davis in the middle. Davis was the final wicket of the innings going for 20. Leicestershire CCC were all out for 199 having batted for 67 overs.

Wright took the key early wicket of Godleman, nicely caught by Azad at first slip in the second over.

But Reece and Wayne Madsen then played well, sharing 92 by stumps with the left-hander recording a half-century off 65 balls with his ninth four in the closing stages.

The Running Foxes mixed the bowlers, trying seam and spin, but the duo will resume on 50 and 37 respectively with Leicestershire CCC striving for early wickets.

IMAGES | Thanks to John Mallett of Outside Off for providing the images throughout the game.