REPORT | Day Two of Leicestershire CCC v Derbyshire in the second round of the 2020 Bob Willis Trophy campaign at the Fischer County Ground.

A cloudier and colder beginning to the day was in stark contrast to day one as Leicestershire CCC and Derbyshire CCC got proceedings underway for the second round match of the Bob Willis Trophy competition at the Fischer County Ground.

The visitors began the day on 101 for one with the Running Foxes hunting early wickets.

A breakthrough came as Chris Wright bowled to Luis Reece who turned the ball down the leg-side. Derbyshire CCC’s opener decided to try for a second run, but Dieter Klein was quick off the mark to throw from fine-leg to run out Reece for 56.

Klein also bowled a testing spell of left arm seam which asked plenty of questions in the opening exchanges.

No. 4 Leus du Plooy made a century in round one at Trent Bridge and settled quickly, hitting a trio of leg-side boundaries in one particular over to really get into his stride.

Leicestershire CCC were pushing for the next wicket and had a fantastic chance when Will Davis found the outside edge with some movement but Harry Swindells couldn’t hold on to the chance.

There were futher signs for Derbyshire CCC as Madsen cut a delivery from Ben Mike over point, where George Rhodes launched himself into the air, however he could only get his fingers to the ball.

Madsen was generally frustrating Leicestershire with some solid defence and attractive strokeplay.

Du Plooy went to his 50 (70 balls) shortly before lunch by lofting left-arm Callum Parkinson over mid-on. Madsen, meanwhile, had long since reached a half-century of his own, off 73 deliveries.

Leicestershire couldn’t prevent Madsen reaching his century after the interval off 172 deliveries with his 17th four, a sweetly timed on-drive that raced across the lush outfield.

Former Derbyshire man Davis then extracted the key man moments afterwards, however, bringing one back in through the gate to hit middle and off.

Madsen's was the second of three wickets picked up by Leicestershire CCC in the session as the bowlers exerted some control.

The first to go after lunch was du Plooy, who was on 55 when he tried to deflect a sharp leg-side bouncer from left-armer Klein down to fine leg, but succeeded only in edging the ball to Swindells, the wicket-keeper taking a smart catch high to his right. 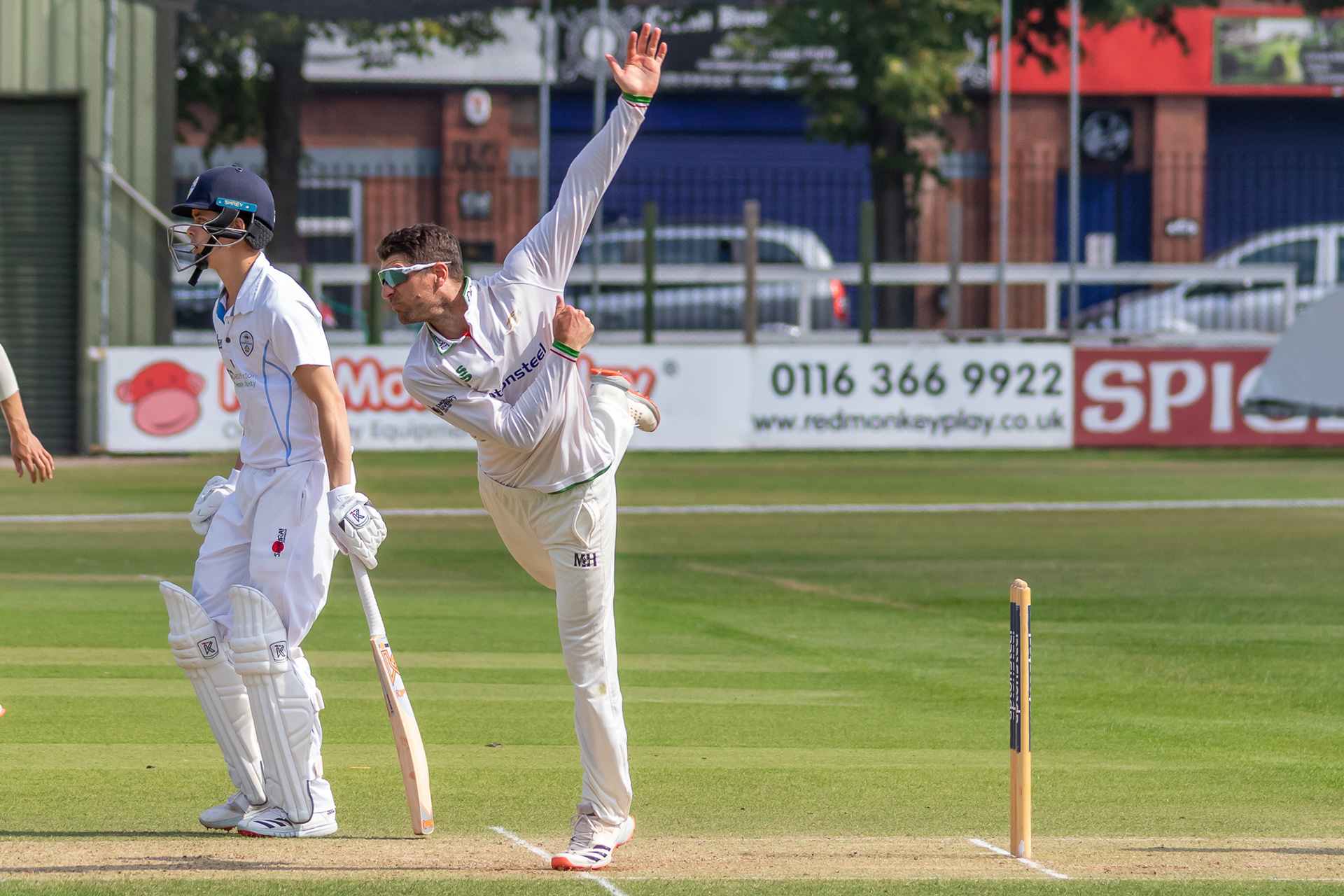 Image - Outside Off - Ackermann in action

As the session wore on, the Running Foxes then had spin from both ends and Colin Ackermann introducing himself was a good move.

His second ball of the day saw Matthew Critchley push forwards on 24, the ball taking the outside edge on its way through to Swindells.

The spinners of Ackermann and Parkinson looked to break the partnership of Harvey Hosein and Alex Hughes with the latter the next man to go. Hughes (27) spooned one up to Rhodes at mid-wicket off Ackermann for a simple catch in the 86th over.

A tidy spell from off-spinner Ackermann (9-3-24-2) kept the visitors in check and the Foxes were charging for the seventh wicket with the new ball.

It came as Klein trapped Dal lbw for 25. Shortly followed the wicket of debutant Ed Barnes, caught by Swindells off the bowling of Davis.

Derbyshire were proving defiant with Hosein reaching his well-crafted half-century off 67 deliveries.

The Foxes were persistent in their approach and the final two wickets came back-to-back from Parkinson. The first being that of Sam Conners, caught by Ben Mike in the off-side for 21, with the second Dustin Melton lbw. 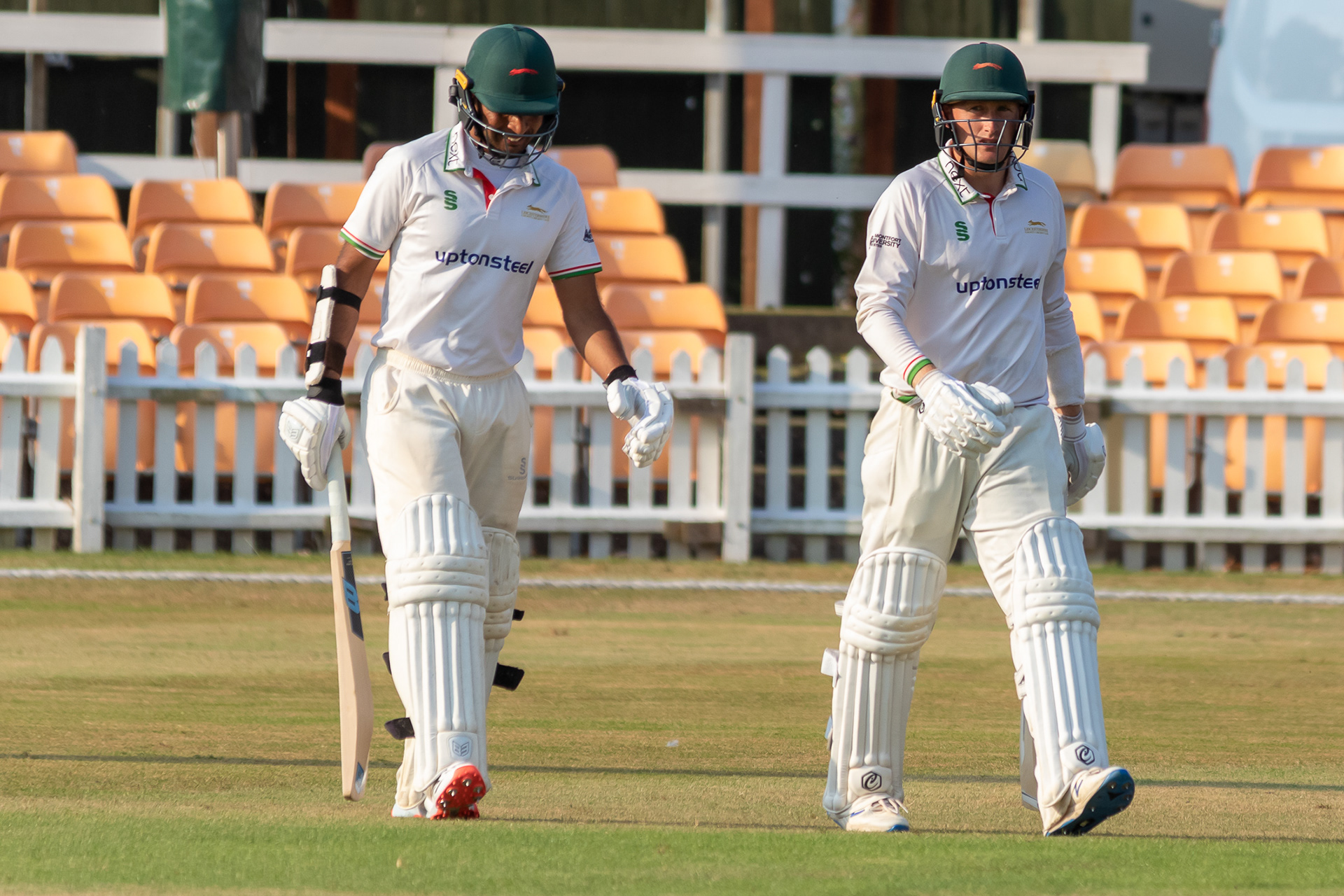 Image - Outside Off - Azad and Parkinson take to the middle to see out the final over of the day.

Parkinson, who will be on a hat-trick for the second consecutive game, came out as nightwatchman and successfully negotiated the final over. The Foxes will begin the third day trailing by 207.

IMAGES | Thanks to John Mallett of Outside Off for providing the images throughout the game.